Mowing on steep slopes can be a dangerous job

Article released in NiagaraThisWeek. Jeffrey Ruttan shares some tips on how to stay safe this summer. 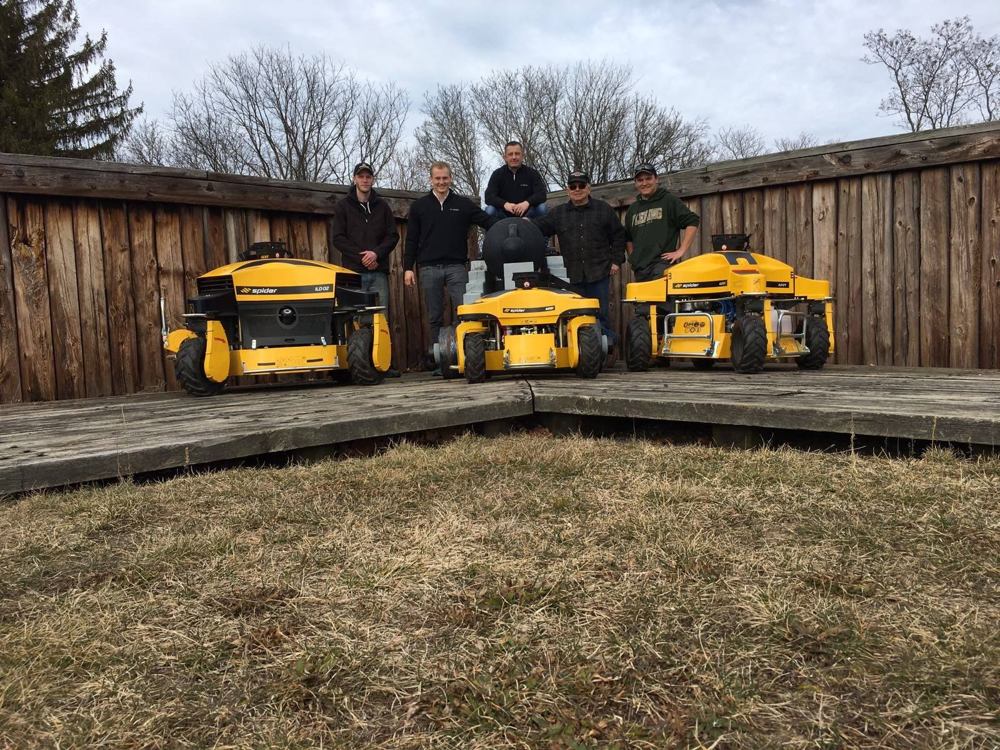 Mowing steep banks and slopes or around the edges of lakes and ponds has always been labour intensive and not particularly pleasant for the crew doing the work. In fact, it can be downright dangerous.

The current ways to maintain these types of environments is either a ZT mower, a walk-behind rotary mower on a rope (now outlawed in most countries), brush cutters/weed-whackers or tractor-mounted side-arm flails.

In New Zealand, Wayne Glasgow, a greenkeeper with 32 years of experience at the small provincial Onewhero Golf Club, died when he became trapped under his mower after it slid into a pond between the eighth and 13th holes. The police officer investigating the incident said the ground was very wet and the mower slipped into the pond as evidenced by skid marks visible on the ground.

Similarly, in the U.K., 20-year old Ollie Floyd died when his spraying rig crashed into a lake at the Celtic Manor Resort golf course in South Wales. He had been weeding fairways when his vehicle rolled into a freezing lake. Staff on the 2010 Course, which hosted the Ryder Cup in 2010, dived in after the vehicle and managed to drag Mr Floyd to the water’s edge. Unfortunately, he was pronounced dead on arrival at hospital.

As mentioned earlier, the process of mowing slopes with a rotary mower tied to a rope has now been outlawed in many countries. The danger is highlighted in a case where a greenkeeper at one of the world’s oldest golf clubs sued for C$260,000, claiming he was badly hurt after being told to cut the grass by swinging a mower on a rope.

Derek Bond said he had to cut grass on a steep slope at Peterhead Golf Club in Scotland, by swinging the 23kg (51lb) mower from side to side using a rope attached to the handle. The 24-year old fell down the slope and injured his leg so badly he needed hospital treatment and considerable time off work.

Lawyers for Mr. Bond said: “He was instructed by his supervisor to cut the grass by using a lawnmower, swinging it across the slope by using a rope that had been attached to its handle. The rope attached to the lawnmower was too short to allow him to cut all of the grass on the slope whilst standing safely at the top. He descended a distance of about one third of the slope in order to cut the grass at the bottom. The momentum and exertion of swinging the lawnmower by the rope whilst standing at an angle on the steep slope caused him to overbalance. His left foot slipped on the wet grass and moss, he twisted his right knee in seeking to regain his balance and then fell forwards downhill.”

Workplace Safety and Prevention Services’ (WSPS) Dean Anderson, speaking at a forum in Guelph in 2015, said that statistically, landscaping is a sector of the Ontario workplace which sees few fatalities, but accidents can and do occur when education and awareness are lacking.

Injuries such as muscle disorders or strains and sprains, are usually caused by repetitive motion, awkward positioning or overexertion, and can be prevented or reduced through simple means of common sense, Anderson said.

“Those things tend to cause injuries to back and lower limbs. Some of those things can be alleviated by doing proper stretching and warming up before doing the job.”

“Employers must train their workers to adopt safe working techniques to prevent injuries,” he said. “When an employee puts his back or knee out, they are often off the job for a longer than average period of time. When they return, they are coming back to the same thing. We tend to be worse at getting back to the job with these injuries than a lot of other sectors.”

Within the lawn and landscaping sector, there is a tendency for employees to be working on uneven surfaces which can lead to slips, trips and falls, resulting in cuts, major bruises and often broken bones.

Having the correct personal protective equipment is important and also having the right equipment to carry out the task is essential. Advances over the past decade in mowing techniques and the equipment available to mow steep slopes have contributed to a reduction in workplace accidents in these potentially dangerous areas.

So just what is available now to help alleviate these issues? The advances in remote control mowing are certainly worth considering. These dedicated remote-controlled mowers allow the operator to control the machine from a safe distance and in comfort. As stated earlier, when using a brush cutter on steep slopes the operator has to stand in extremely awkward positions putting strain on knee and ankle joints, twisting to move the implement in an arc while subject to noise and vibration. All this physically demanding work and movement is eliminated, noise is dramatically reduced and there are no vibrations to worry about, simply because the operator is not in physical contact with the machine. All the functions are at the operator’s fingertips making the mower very easy to use.

There is a selection of these type of mowers on the market including both tracked and wheeled derivatives. In the tracked sector there are brands such as the Alamo Traxx, MDB Green Climber, Tiger Prowler and McConnel RoboCut, which tend to have been designed for the forestry sector and adapted for grounds care. In the wheeled sector there is only one machine, the Dvorak Spider.

The tracked mowers tend to be heavier and more suited to clearing heavy vegetation. They use either flail heads or heavy-duty rotary blades whereas the Spider mowers are lighter and more manoeuvrable and can be used on finer grasses. Tracked vehicles are obviously less manoeuvrable as they are skid-steer and can cause damage to the turf when turning, especially in wet or unstable conditions, such as on landfill sites.

Spider mowers are the only remote-controlled slope mowers that have been purpose-designed for the maintenance of banks and steep slopes. The Czech company Dvorak created the remote-controlled mowing sector when they introduced the Spider ILD01 back in 2004. The larger and more productive Spider ILD02, was introduced in 2006 and just two years later the Spider range was being distributed in more than 30 countries.

With this travel system, Spider mowers can move easily on a hillside or on waterlogged terrains and freely change direction while maintaining four-wheel drive. The dancing step makes the mowers very stable, manoeuvrable and gentle to a terrain, since the Spider is not required to turn like tracked machines.

With many options out there to choose from, tracked or wheeled machines, there is now equipment available to the farming and landscape industries that can make the job of maintaining our greenscapes, easier and safer.

Select a country of delivery and currency

We use cookies to personalise content and ads, to provide social media features and to analyse our traffic. We also share information about your use of our site with our social media, advertising and analytics partners who may combine it with other information that you’ve provided to them or that they’ve collected from your use of their services.

Here you can enable cookies according to your own preferences.You can change those settings any time in the future by clicking 'Cookie settings' link in our website's footer.

Marketing cookies are used to track visitors across websites. The intention is to display ads that are relevant and engaging for the individual user and thereby more valuable for publishers and third party advertisers.